Ghent is a real open-air museum. When taking a second glimpse you are rewarded with beauty and interesting facts.

At every corner old and new mix.

Numerous facades tell their own story. That´s why you should take a closer look while talking a walk through the old part of Ghent.

Orientation for the illiterate

At the Korenlei it was a lascivious place in the Middle Age and later. Right at the harbor two golden swans remember at the facade about this time.

Where two swans looking at each other form a heart the swans at the building are looking away from each other. Sailors knew that this was the house of pleasure in Ghent. Today the Marriott Hotel is located here.

A few steps further a golden ship sparkles on the roof. It turns slowly in the wind. Beneath it sea monsters romp and the two anchors point out the meaning of this house.

Below, in view height we discover another ship. The sign of the sailors. Across the river Leie, at the so called Graslei, the grain house rises.  The impressive buildings was one the most important houses in Ghent. Nearby the smallest house in Ghent squeezes into the tiny alley and wants some attention.

Most of the old facades are made of stone. Because of the close spatial proximity, reconstructions from wood to stone were financially supported to keep fire hazard at a minimum.

The large meat hall is built out of stone walls. Inside you can still see old wooden beams. Underneath meat was sold to wealthy inhabitants. Now you can see the famous Ganda ham hanging from the wooden beams.

Outside the former rumen house tells about its history. It´s called Galgenhuisje (Café t´Galgenhuis) which means gallows house remembers us about the convicts being hanged at the back of the house. Today the Galgenhuisje ist the smallest café in town. Altough the name doesn´t sound very appealing it´s a nice café with a lot of flair  and a good view.

At the Sint-Veerleplein, across the castle Gravensteen we look at the gate to the Old Fishmarket. It´s easy to recognize because of all the fish and sea related symbols. It wasn´t built in the Middle Age but later in 1689. At the top of it Neptune perches on top a man, who sybolizes the river Schelde and a woman, symbol for the river Leie. Across the street the castle Gravensteen has a lot to tell. Dungeons, tower stairs and a museum with instruments of torture. (Nothing for me to be honest.) Mixture from the 15th to 18th century at one building

The city hall in Ghent is a mixture of architecture from the 15th to the 18th century. The goal was to create an impressive building. While building it the town had problems to finance it once in a while and that´s why you can see different style eras around the city hall.

A few steps further and soon it´s quiet. Only piano sounds reach our ears. We reached the Achtersikkel. One of the wealthiest families of the town used to live here. Why do we know? Because one of the few wells is in the patio. 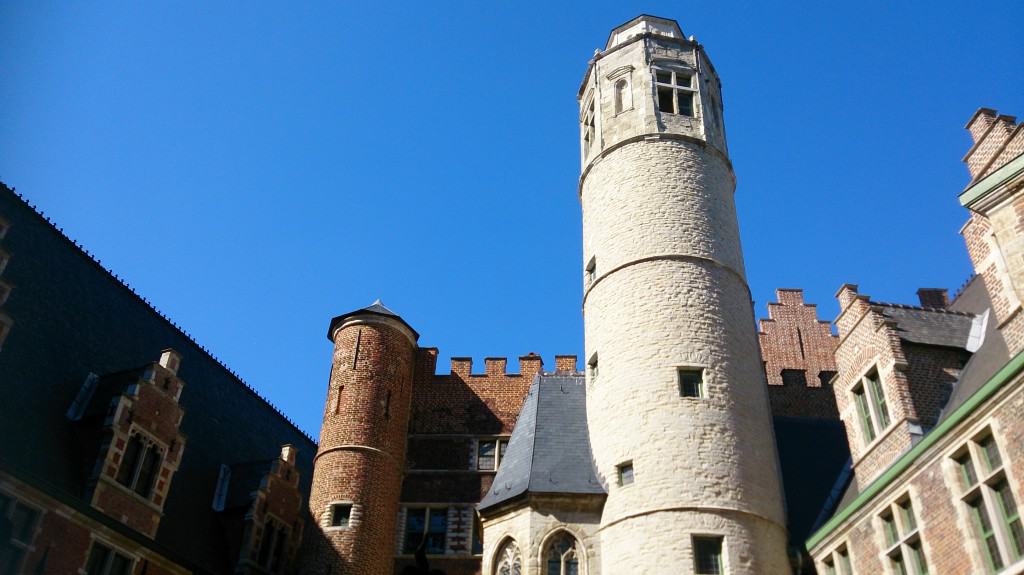 Last but not least: Did you know Ghent has a Manneken Pis too like the capital Brussels? There are theories about this house and one of the is that in the Middle Age a merchant used the symbol of the God Bacchus for his house.

The houses in Ghent have a lot of stories to tell. There are a lot more impressive houses and buildings here.

And the best is: In Ghent you can reach any of the buildings while walking around. Why not take a walk and be enchanted by the stories and symbols from the facades.

Only one day in Ghent? That´s what you can do in one day.

Thanks to City Ghent for the invitation. The opinions are ours.

24 thoughts on “Ghent – When houses tell their stories”