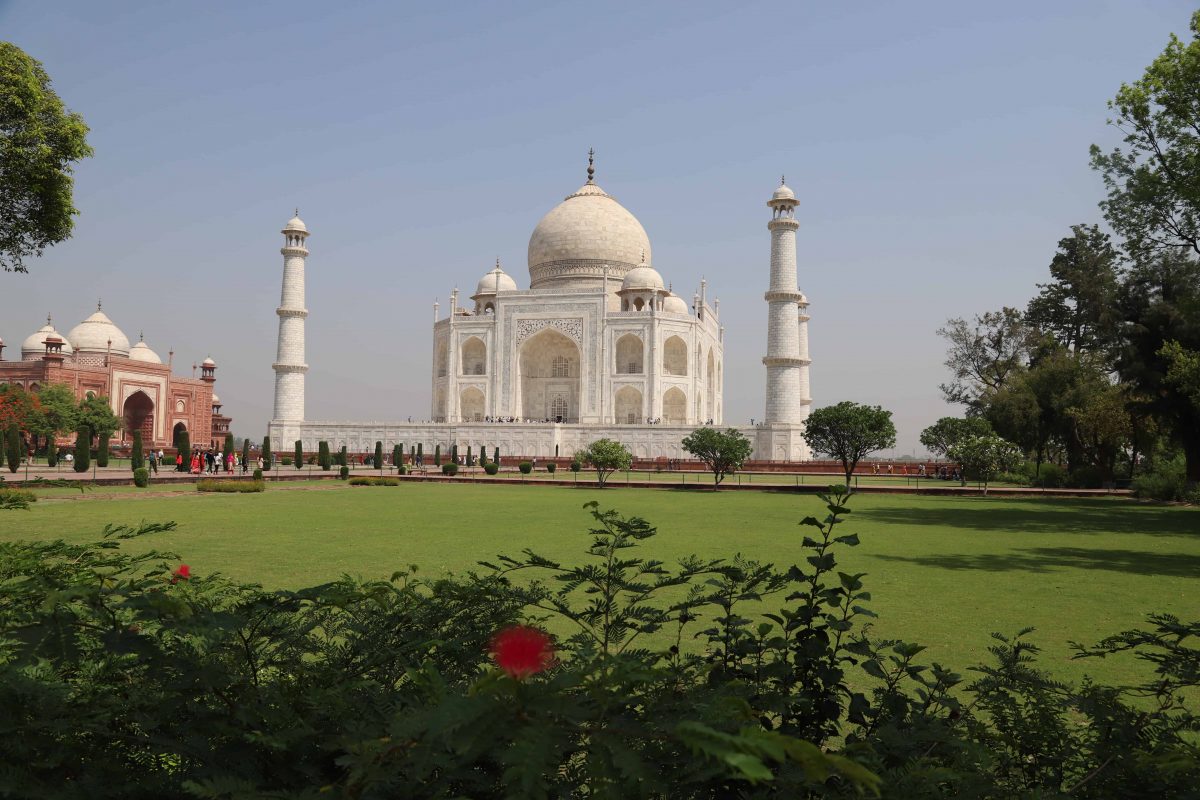 A Golden Triangle India Itinerary means planning a trip to the three cities Delhi, Agra and Jaipur.  Some of the most beautiful and famous landmarks in the north of the country, if not in all of India, are located in these places.

The Golden Triangle in the area of ​​Rajasthan and Uttar Pradesh is a popular travel destination, especially for first-time visitors. The Taj Mahal is definitely the most famous place to visit during a Golden Triangle trip and the reason for lots of tourists to come to this area.

During a Golden Triangle tour most of the highlights are in and close by to the following cities and areas:

You can do the Golden Triangle India by train or book a private tour with your own guide and driver. This is how I did it.

If you want to travel around by train you can book tours and guides here.

To get a better understanding about the itinerary and the places that are included you can check out my India Golden Triangle Map:

A trip to the Golden Triangle starts at Delhi. The international flights arrive at Indira Gandhi Airport and before hitting the road, exploring Delhi and New Delhi is a good starting point to get used to the Indian culture and the intense colors, the noise and beauty of the sights.

The most famous sights in the capital of India include the Sunday Mosque, the government district, the India Gate, the memorial of Mahatma Gandhi and Qutb Minar, which is a famous Indian UNESCO World Heritage Site. The Jama Masjid Mosque is worth a visit. Since it is a mosque, women are given a cloak to visit the mosque and the mosque area. Shoes have to be removed here and you walk around barefoot or you can put on temple socks.

Opposite the main entrance there is a very busy street where all sorts of things are sold. Watching the hustle and bustle from the Jama Masjid Mosque is exciting, because there are so many impressions and people that it’s hard to even know where to look at first. The Mahatma Gandhi memorial is located in a spacious park. Before entering the park you have to go through a security check.

The actual memorial of Mahatma Gandhi marks the place where his body was burned. His ashes were brought to various places, such as the Ganghes or Sri Lanka.

In the parking lot there is a statue of the Indian activist.

Government district and the India Gate

At the India Gate and the government district, we made a short stop for photos on our private trip.

I liked Qutb Minar best in Delhi besides the Sunday Masjid mosque. Qutb Minar, also called Qutab Minar or Qutub Minar, is a minaret located in the Qutb Minar complex. Unfortunately, it is no longer possible to climb the minaret, as there was an accident years ago in which a group of children fell down the stairs.

The minaret is one of the tallest tower buildings in the Islamic world.

Next to the minaret there is an iron column on the site. It is so interesting and also well-known because it is several hundred years old and has no rust on it.

There are also old temples and buildings in the complex.

A visit to the Qutub Minar is very worthwhile.

Agra is about a 3½ hour drive away from Delhi. The city in Uttar Pradesh lies on the banks of the Yamuna River. Agra, with around 1.5 million inhabitants, is known above all for its Mughal buildings and is very well visited.

We were on a private trip with our own driver and a guide and arrived from Dholpur. However, it is also possible to take a train to Agra from Delhi.

What would a visit to India be without seeing the Taj Mahal in Agra?

It is one of the most famous buildings that Shah Jahan had built. The Taj Mahal is a tomb the Shah built for his late wife.

About 500 kilograms of gold were used in it.

There are strict controls at the entrance to the Taj Mahal. Apart from water, the camera and cell phone, handkerchiefs and a wallet, not much more is allowed to take with you. Books and power banks are prohibited. There are also security controls like you are used to from the airport. (Incidentally, also in the better hotels in India).

There is a lot to see in Agra and the surrounding area in addition to the Taj Mahal:

The Red Fort / Agra Fort is a UNESCO World Heritage Site and an impressive complex in Agra.

After going over the wooden bridge there is a security check. After it you walk up a long, wide ramp.

The facility is huge and a few hours should be reserved for the visit. In some places of the Agra Fort, the view extends to the Taj Mahal. Definitely worth a visit.

When I first visited India in 2009, I never heard of the Baby Taj Mahal and never visited it. During my second visit I was excited to see and explore the Baby Taj.

The baby Taj Mahal Itmad ud Daulah is a mausoleum and is located on the banks of the Yamuna River.

Taking a first look at the baby Taj Mahal it becomes clear where the name comes from. It is a small edition of the great Taj Mahal. At least it resembles the large mausoleum in some parts.

The Itmad-ud-Daulah is located on the Yamuna river and there is the possibility to look directly down on the river.

Sikandra is the final resting place of Mughal Emperor Akbar on the outskirts of Agra.

Akbar had the mausoleum built during his lifetime. After his death, his son completed the building. The entrance to the area is already impressive.

Fatehpur Sikri is 36 kilometers away from Agra and was the capital of the empire for 14 years, but was officially abandoned due to lack of water.

However, this was just an excuse from the ruler to abandon this place because he wanted to go back to Agra. Why he had Fatehpur Sikri built at all is a long story, which tells briefly that the ruler wanted a child and only when he went to a healer did he have a son within a year. He promised that he would relocate and therefore Fatehpur Sikri was built.

The red sandstone complex is located 36 kilometers west of Agra and to visit the city of victory, you should plan in at least two hours.

The area, built from red sandstone, consists of various buildings. These include three buildings for the ruler’s wives, various audience halls and of course the ruler’s living quarters.

Like the Red Fort (Agra Fort) and the Taj Mahal, Fatehpur Sikri is a UNESCO World Heritage Site.

The Palace of the Winds – Hawa Mahal

The Palace of the Winds is a wall, where the harem ladies were able to watch the street festivities unnoticed from behind the windows. The Hawa Mahal was built in 1799 and is one of the main attractions in Jaipur.

From a rooftop cafe opposite you have the best view of the Palace of the Winds.

The city palace now houses a museum. The gates inside the palace are particularly beautiful. The Jantar Mantar is an observatory that houses, among other things, the 23 meter high sundial. You can also see the Jai Prakash Yantra, two hemispheres embedded in the ground. They represent the sky vault. Amber Fort is located on a hill outside of Jaipur. The Fortress Palace is one of the most visited places in the Jaipur area. The Amber Fort can be reached on foot as well as on the back of elephants.

On the way from Amber Fort back to Jaipur, it makes sense to have a short photo stop at the summer palace. The summer palace is in the middle of a lake and can’t be visited by the public.

The Albert Hall Museum is located in the Ram Niwas garden outside the city walls. Those who have time can visit the museum. We only made a short photo stop and walked through the garden and around the building.

Other sights and worthwhile stops around the Golden Triangle Area

Dholpur is still a little-known city in terms of tourism. On our private trip along the Golden Triangle, we visited the beautiful Machkund temple and went on a boat safari on the Chambal river.

River dolphins, crocodiles, alligators, turtles and many species of birds frolic in and on the Chambal River.

There is also the Raj Niwas Palace in Dholpur, which has been converted into a Heritage Hotel today and can also be visited. The Ranthambore National Park is located southeast of Jaipur and is best known for the Bengal tigers. In addition to the tigers, leopards and bears roam the thicket.

There are also peacocks, monkeys, owls and many deer, deer and sometimes antelopes in the national park. If you are interested in safaris, the Ranthambore National Park is a great location for a tiger safari while being on a trip around the Golden Triangle.

In April less visitors are traveling around Rajasthan and Uttar Pradesh to do a Golden Triangle India trip. In April it tends to get hot (up to 43 degrees Celsius) but I still enjoyed it a lot.

Itinerary for Golden Triangle in India

I would opt for at least for a 7 day Golden Triangle tour, especially if you want to see more than the three cities.

If you only want to do the Golden Triangle Delhi Agra Jaipur you can do a 5 day Golden Triangle trip or still plan to visit for 7 days and take more time to explore the three cities.

CONCLUSION: A Golden Triangle trip in India is particularly suitable for first-time visitors to India, to immerse themselves and get to know the Indian culture, nature and way of life plus to see the best attractions in the northern part of India.

Avoiding the Delhi Belly – How To Stay Healthy in India Disclosure: Please note that some of the links are affiliate links. I receive a small commission when you book via a link but you don’t have to pay more for it.